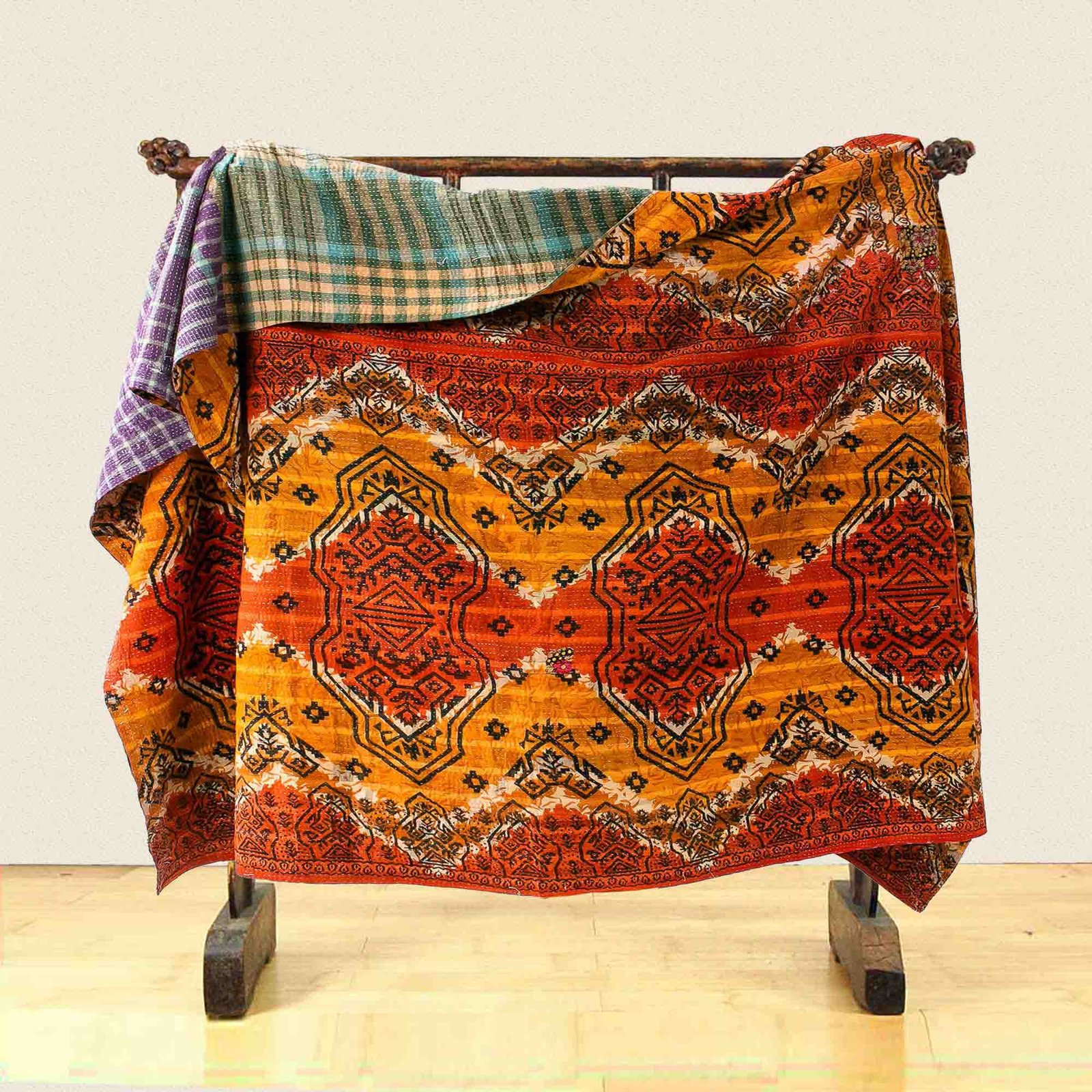 Kantha Quilts Around the World

Truly a timeless skill, discussion of Kantha embroidery dates back as far as the 6th century B.C, in a Sanskrit text written by Panini. The tradition of kantha design has changed over the centuries, with its current form being less decorative than in times past, however, the tradition lives on.

Kantha originates from the Eastern part of the Indian continent, particularly in Bangladesh and the Indian states of Bengal, Tripura and Odisha. The quilts have always been made using disused cotton or silk saris, pieced together to patch areas of damage and sewn together by hand using a broad running stitch. This gave the quilts their name, “kantha” being Sanskrit for “rags”.

The running stitch has always been a feature of kantha blankets, but they would have also featured much more elaborate designs than what you see today. Days, weeks, even years of hand stitching could go into the decoration of one quilt, particularly if it were to be given as a wedding gift. Women used their embroidery as a form of storytelling, a way to pass information from one generation to the next using images.

While their methods would have been similar, the designs favoured by Muslim and Hindu women in the region differed. Hindu women tended to create imagery based on the Itihasa, the stories of religious history. Muslim women, meanwhile, generally opted for images found in nature, such as flowers, stars and the moon.

Traditional kantha and the more elaborate nakshi kantha have been made throughout Bangladesh for centuries. Whether the quilts originate from Bangladesh or West Bengal is the topic of much debate and a recent decision is hotly contested by Bangladeshi artisans.

West Bengal is one of the Indian states which has the richest history of creating kantha quilts. In 2008 West Bengal was granted Geographic Indication for nakshi kantha, but Bangladesh plans to challenge this at the next application cycle.

A remote area in Northeastern India, Tripura is the country’s third smallest state and is geographically isolated from its neighbouring states. Kantha quilts were traditionally worked on during the wet season when women would spend more time indoors.

In the Indian region of Odisha, kantha is often used in a slightly different way. The layers of fabric are hand-stitched in the traditional fashion, but more layers may be used, allowing the blanket to be used as a cushion that can be slept on.

Open chat
Hello, Please let us know how can we help?